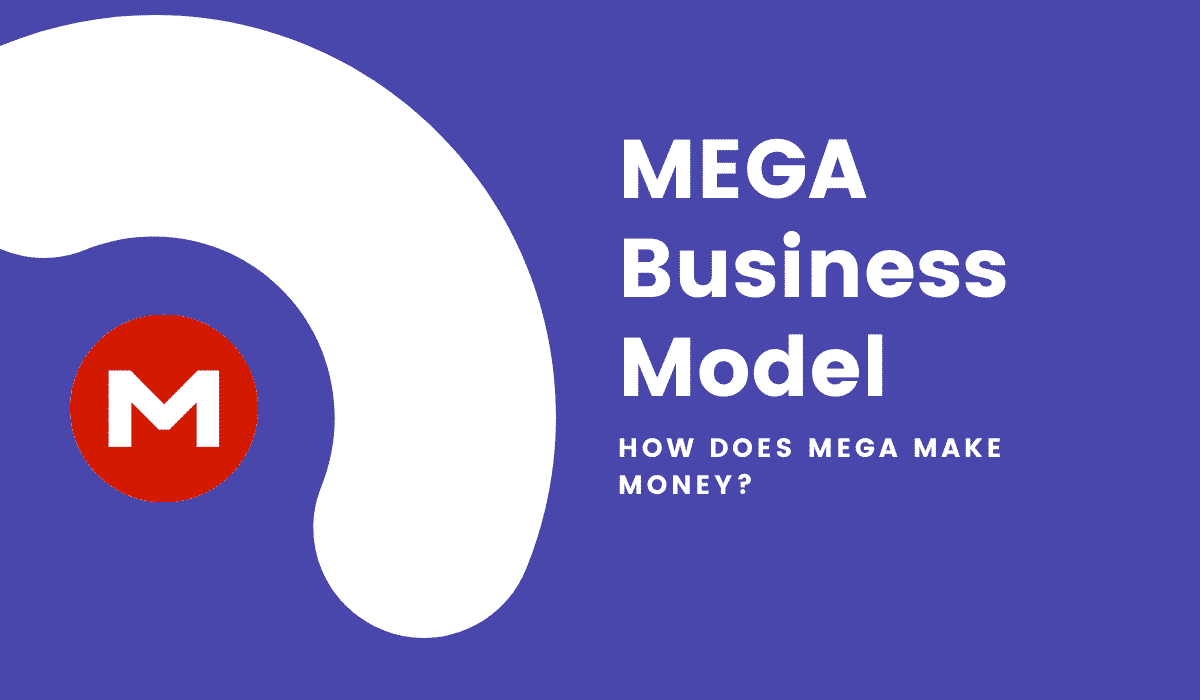 MEGA offers 50 GB free cloud storage for all new users! But how does MEGA make money? During my research, the MEGA business model turned out to be one of the very interesting business models out there.

How does MEGA make money?

MEGA makes money with a freemium business model. They offer 50GB free storage and charge a monthly fee for usage above the quota. These storage upgrades range from €4.99/month to €24.99/month depending on the storage limit chosen by the user.

A quick summary of the MEGA Business Model: How Does MEGA Make Money?

What is MEGA or mega.nz?

MEGA is a dedicated cloud storage company much like Google drive with the additional benefit that it offers 50GB for free to every single user that signs up. Yes, that’s right. It’s 50 Gigabytes.

This service was started by Kim Dotcom who’s one of the very well known names in the internet business industry. His initial company, Megaupload, which was taken down by the government for copyright infringement, was replaced by Megaupload 2.0 or just MEGA.

But that’s not it.

Apart from being “just another cloud storage” company, Mega promises end-to-end encrypted data storage for all the uploaded files and confirms that the keys to decrypt the file are only available to the user.

And if you’re worried about your business meetings and video calls being “tracked” by companies like Zoom and the likes, you’re in luck. Mega offers business plans that allow end-to-end encrypted business conference calls too.

Let’s move on to understanding MEGA’s business model and how MEGA makes money.

The Business Model – How Does MEGA Make Money?

Megaupload 2.0 (MU2) or MEGA planned out on earning with microtransactions with the use of their blockchain “Bitcache”. The initial business model was to allow content creators to monetize every file that they upload to the platform and distribute it without worrying about their content getting stolen.

But Kim has a raving fan following. And that fan following benefited MEGA a lot. Let’s understand how MEGA makes money.

What Problem Does MEGA Solve?

Cloud storage has been a risky business for most privacy seekers. People do not want their storage companies knowing what data is stored on the cloud and using that for any sort of analysis.

Kim knew this since the beginning and decided to create a service that offers complete data privacy. This helped gain mass appeal from users who were frustrated with the existing cloud storage solutions and helped MEGA make money in a market the people had lost trust in.

Who are MEGA’s Customers?

MEGA has a user base of around 100 million in 2020 (estimated based on Wikipedia page), and there are three kinds of customers that sign up for the MEGA drive service:

The first two kinds of customers are the ones that potentially convert to being paid users for the platform and that offsets the costs of sustaining the users looking for free storage.

What Products Does MEGA Offer to Solve These Problems?

MEGA’s main product segment is their cloud storage service. But here’s how they address the issues that they created the company for:

How Does MEGA Make Money?

Coming back to our topic of understanding how does MEGA make money, let’s see the different sources through which MEGA as a service is being promoted by their users.

MEGA has a very seamless affiliate program. I call it seamless because:

No other cloud storage service has such a simplified and streamlined affiliate program. Most require you to share a special link rather than just any link from your account.

Also, they have the affiliate dashboard integrated within your storage account which makes it way easier to view your earning details and motivates existing users to share more of their files.

Compared to all the other cloud storage services out there on the internet, MEGA stands out because of their low cost subscription rates.

For just €10 per month per user, you get access to unlimited storage along with encrypted video conferencing for business purposes.

Though you might consider Google or OneDrive to be cheaper in terms of pricing, remember MEGA is giving unlimited storage with the only consideration that the storage is used for genuine business purposes. If you are wondering how does MEGA make money, this is the product that they sell to earn their revenue.

3. Generous Free Offer to Get Leads

By giving out 50 GB of free storage, MEGA gained large word of mouth popularity in multiple forums. People who had no idea about any other cloud storage apart from Google Drive and OneDrive started moving their files onto MEGA after learning about this offer.

A very well known metric for online businesses is an expected conversion of 1-2% for all the visitors that ever hit the website.

Let’s calculate how much money does MEGA make based on these averages.

Even though the data is old on Wikipedia (MEGA user count was around 35 million), it’s safe to assume that in 2020, MEGA has at least 100 million signed up users.

With a very conservative estimate of 1%, it accounts for over 1 million users paying on an average of €8 per month. Not bad at all!

Even the most conservative estimates suggest that MEGA earns around €8 million per month! And for such a lean team working on the platform, this amount is huge even after considering the cost of storage and maintenance.

Okay, so we now have a fair idea of how does MEGA make money and what the MEGA business model is all about, let’s understand their marketing strategies.

Being an expert at fundraising, Kim Dotcom was able to raise more than $1 million for their initial startup costs. Now the people who invest in a startup automatically become their initial promoters since they want their investment to grow.

This helped MEGA gain a lot of the initial traction pretty quickly.

Megaupload was a hit. In the peak time, Megaupload was heading towards a billion dollar IPO when the feds took the company down. But Kim promised the users that there will be a Megaupload 2.0 that will be better.

When the existing fans found out that Kim had launched the promised Megaupload 2.0, there was a flood of traffic to the website without much help needed on the outside.

Though I don’t really see this on the website now in 2020, Kim’s initial plan was to use MEGA or Megaupload 2.0 as a platform to help content creators monetize their content through microtransactions. The sheer volume of downloads and sharing would have automatically earned a lot of money for MEGA.

Though the plan hasn’t worked out due to blockchain limitations, it was enough for the platform to get a surge in content creator traffic.

As we already discussed before, affiliates are also a major source of revenue for the company. The biggest reason being that they have one of the longest duration cookies (12 months) compared to all the affiliate programs out in the market.

And finally, MEGA still is a name in the cloud storage industry because of the one and only fact that they offer free 50GB cloud storage for all people who sign up.

That’s it for today! I really enjoyed understanding how MEGA makes money and the MEGA business model and will continue to create a lot more articles on business models as we go along. If you haven’t already checked it out, do have a look at the simplified Sodexo business model article that I wrote last week. Also, if you’re interested, do check out some of the more recent SaaS business case studies for Duolingo and Discord.

See you next weekend!

Walmart Business Model: How Does Walmart Make Money With Such Low Prices?

In these times of need, the team has decided to donate all revenues generated on the website to support those who’re affected by COVID-19.